Fat Cats and Rats Get Their Day in Court

In a case involving a dispute between a labor union and municipality over enforcement of a sign ordinance against common union protest methods, the appellate court had the opportunity to begin an opinion with, “Rats. This case is about rats. Giant, inflatable rats . . . Cats too—inflatable fat cats, wearing business suits and pinkie rings, strangling workers.” Constr. & Gen. Laborers’ Local Union No. 330 v. Town of Grand Chute, Wisconsin, No. 15-1932, 2016 WL 4410073, at *1 (7th Cir. Aug. 19, 2016).

In early 2014 a construction union set up the giant inflatable cats and rats as part of an ongoing protest against the employment policies of a nearby construction site. Each morning, union members would inflate the rat or cat and stake it into the ground either approximately 70 feet from the street, or on a median between a service road and large avenue, and take the creature down each night.

The Town of Grand Chute forbids private signs on the public way, and defines signage broadly to mean any structure conveying a particular message. Although the specific timeline was in dispute, at some point either before or after a newspaper article about the protest was published, the town decided to enforce the ordinance forbidding private signs on a public way and demanded the union immediately remove the inflatable animals. The union filed suit soon after.

The majority opinion noted that it was only the manner in which the inflatable animals were secured that was at issue, and had they been secured by a truck or ropes held by protestors there may never have been a dispute because the ordinance at issue referred only to items secured to the ground.

The opinion also discussed the basic validity of the town’s ordinance, citing to Members of City Council of Los Angeles v. Taxpayers for Vincent to support the position that a city may lawfully ban all private signs from the public way. The majority opinion seemed to lean in favor of the union’s argument that the ordinance’s enforcement had been discriminatory in application, but ultimately narrowed in on whether the case was moot.

In deciding that it was moot, the majority opinion looked at the fact that the town’s code had since been amended, the targeted construction project was completed, and the union no longer picketed the site. The court also decided that, contrary to the position held by the union, there was insufficient evidence to demonstrate a similar future protest would occur in the town.

Judge Posner, writing in dissent, disagreed vehemently on the issue of mootness, arguing that the potentially unlawful motive in enforcing the ordinance should be reason enough for the court to decide the matter. Judge Posner forcefully argued that the town’s action was a clear violation of the union’s First Amendment rights due to the town’s apparent selective enforcement of the ordinance, stating “government cannot be allowed to suppress the visual equivalent of political speech without a more substantial aesthetic complaint [than the town’s argument that the rats distracted drivers due to their ugly features].”Adding to the appearance of discrimination, past violators of the same ordinance were given 30 days to remove the offending sign on an ad-hoc and informal basis, while the union was told to remove the inflatable animals immediately.

Although the court did not decide the merits of the case, inflatable rats and their well-dressed feline companions may feel a little more secure on the public way in the wake of this decision. Despite the majority’s decision regarding mootness, all three members the Circuit’s panel expressed concern about the possibly discriminatory enforcement of the town’s ordinance. Municipalities should take care to enforce similar ordinances uniformly to avoid any appearance of unlawful discrimination. 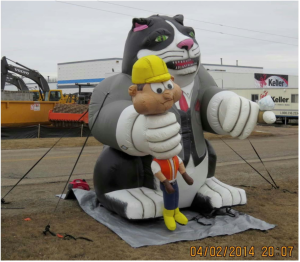 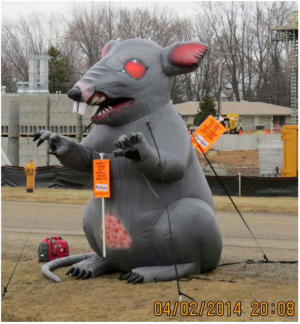